On this page: the 26 panels created for the 2009 exhibition 'Dear Mr Burns' - each panel has an image of the Honorary Member, a short biographical note, the text of the acceptance letter, and some associated information. Irvine Burns Club continues to display the panels at functions. The project was conceived and chaired by Past President W A ('Bill') Nolan.

The first two Honorary Members were, in 1828, the Irvine-born James Montgomery, by then in Sheffield, and John Galt, by then establishing towns in Ontario, Canada. Since then, over 300 individuals have accepted nomination from around the world, their letters preserved.

Every nominee is requested to accept in their own handwriting, though this is not always done, with some typed, some prepared by secretaries for signing, and even one emailed. Their letters have all been transcribed and are available online via the Honorary Members page. The letter shown on the Welcome panel is the witty and poetic acceptance of Honorary Membership from Anne Lorne Gillies, the singer, teacher and academic, in 1998, including a greeting in Gaelic.

Scroll down this page to view the panels . . .

In the honorary member section, you will find, for each individual, biographical information, with indications of why Irvine Burns Club nominated them, and the text of their letter of acceptance - each one is eminent in some way, and well worth reading about. 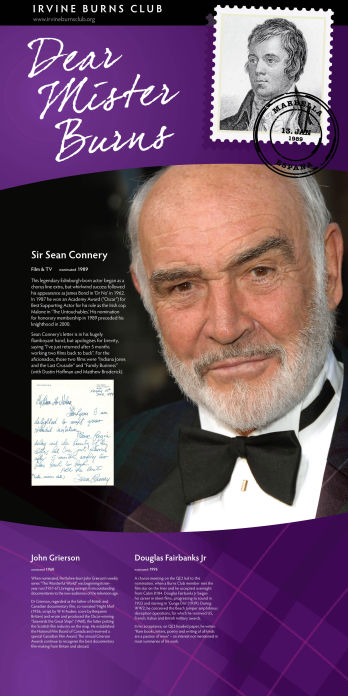 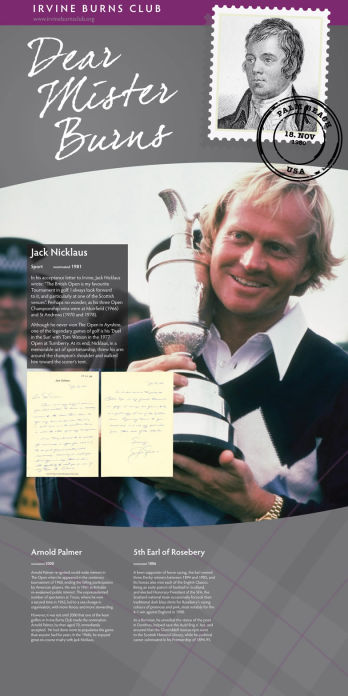 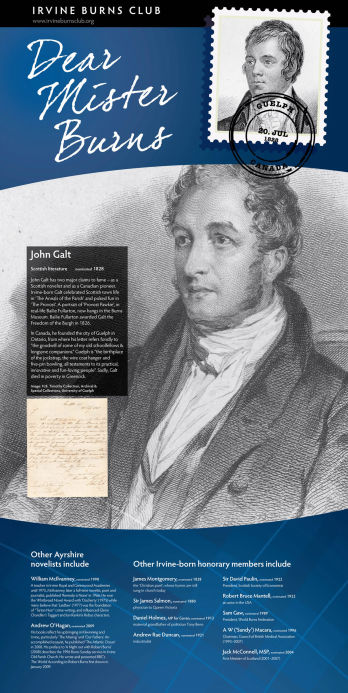 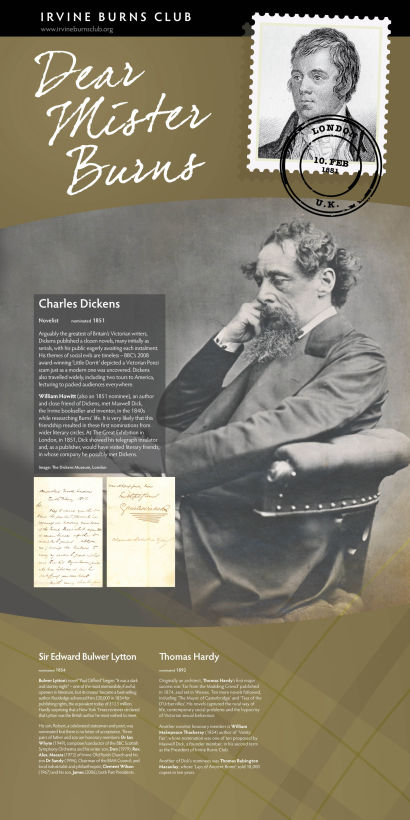 Irvine book-seller Maxwell Dick may have met Dickens, who accepted in 1854.
#5 Read more . . 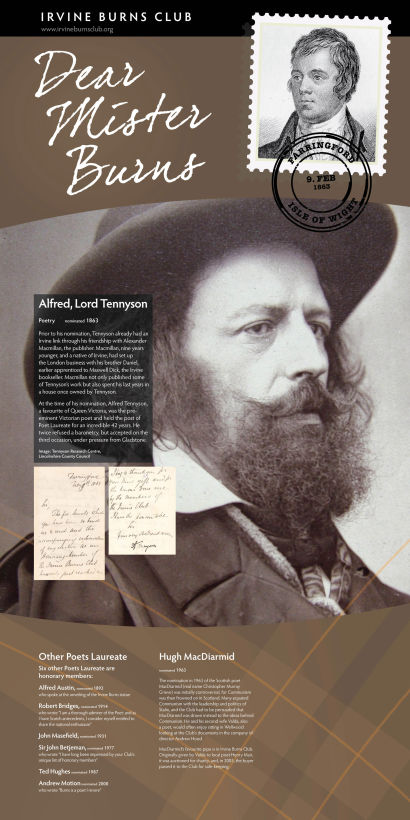 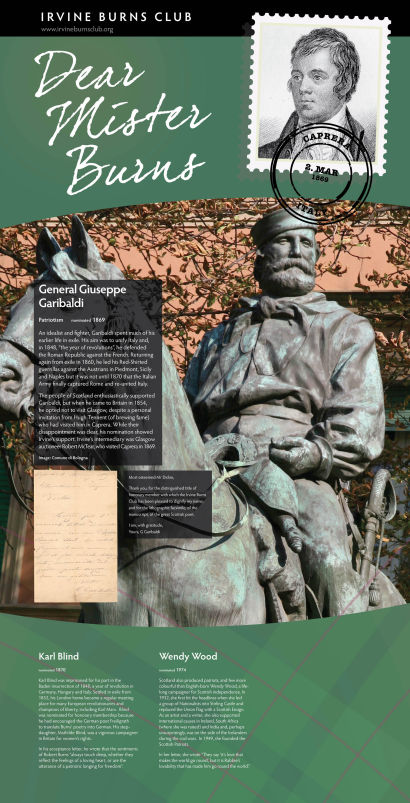 Robert McTear visited Garibaldi in 1869 and brought back his acceptance letter.
#7 Read more . . 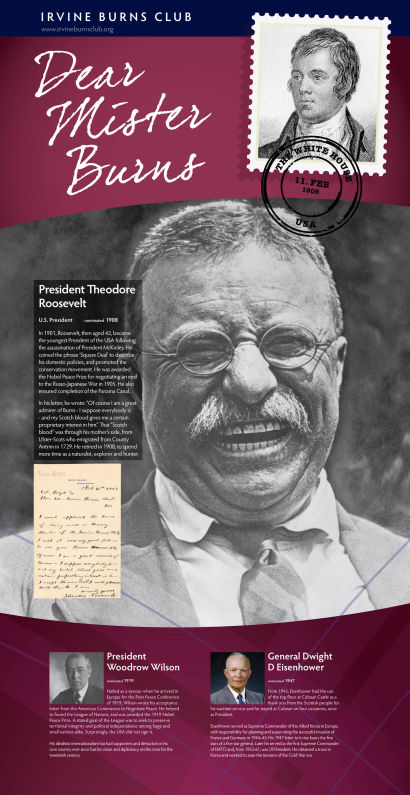 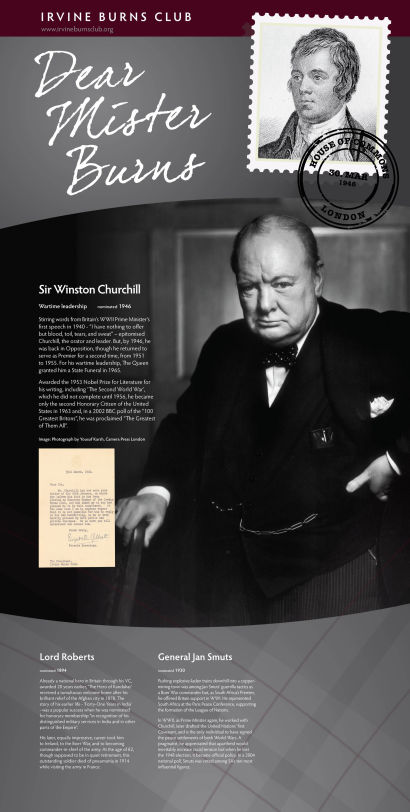 This wartime leader accepted nomination while back in Opposition in 1946.
#9 Read more . . 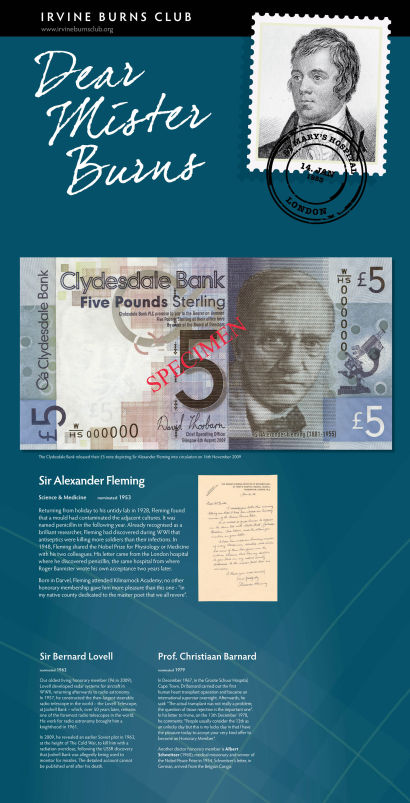 The Ayrshire doctor who discovered penicillin accepted in 1953.
#10 Read more . . 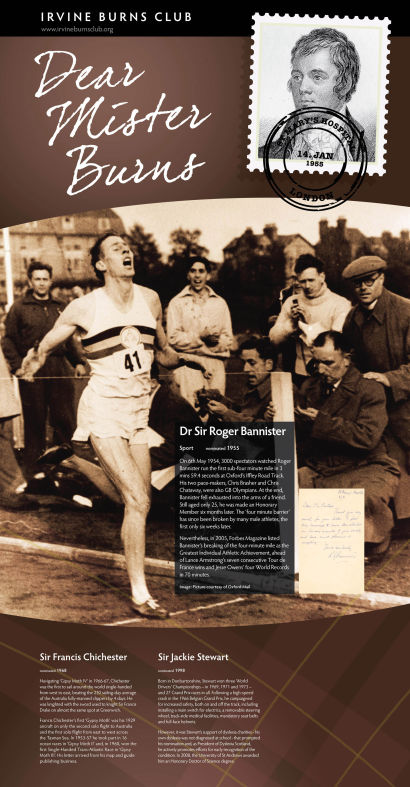 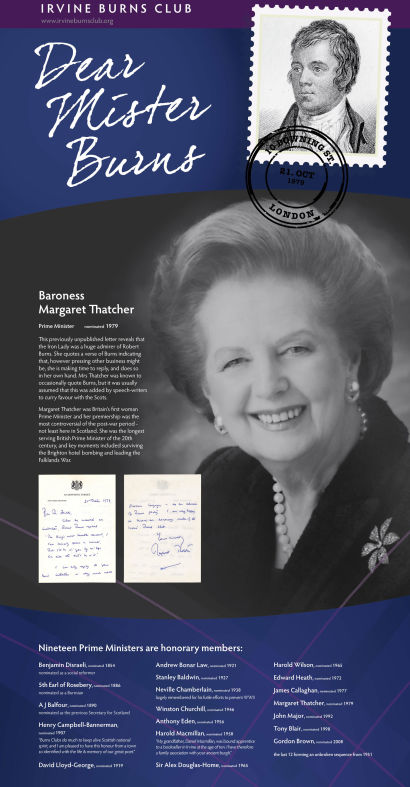 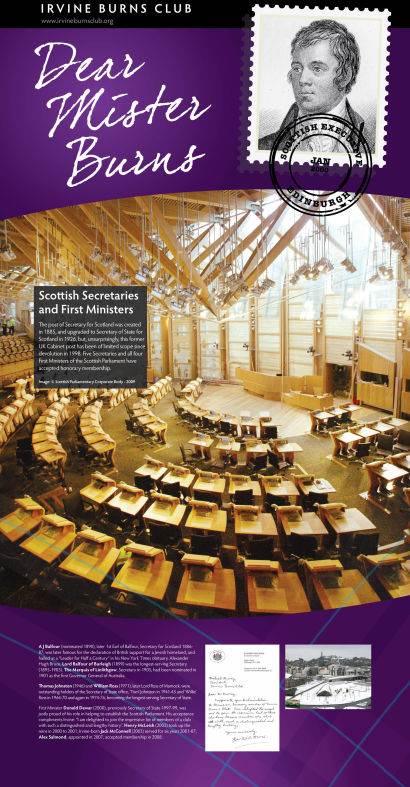 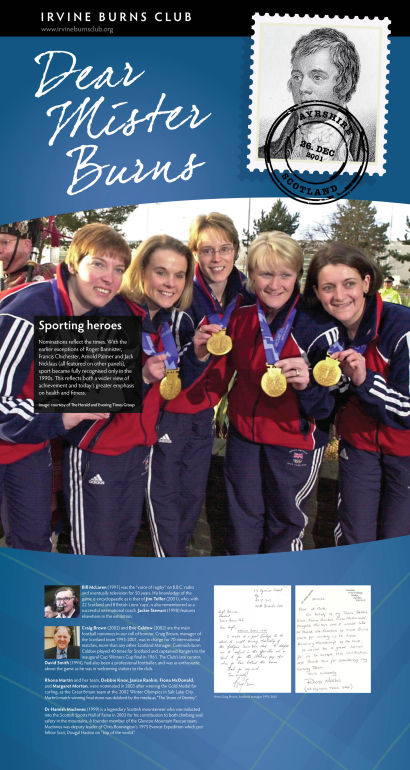 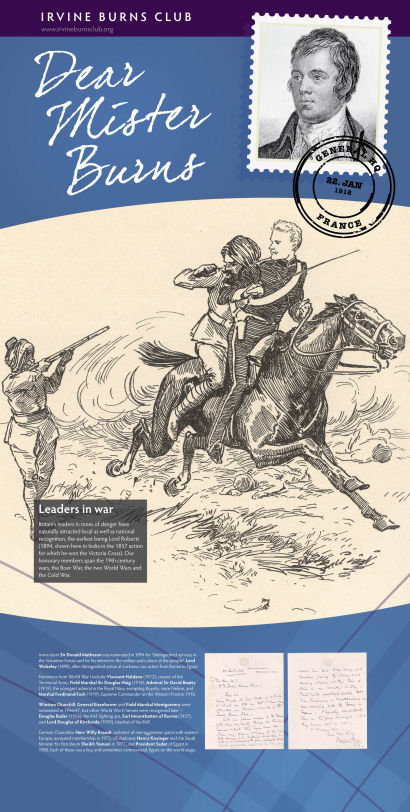 Lord Roberts was nominated in 1894 and several other nominees were 'Leaders in War'.
#15 Read more . . 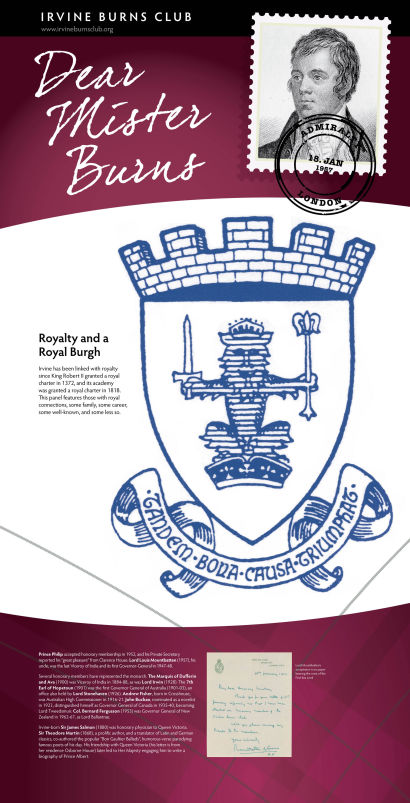 Royalty has sent acceptances to our Royal Burgh, such as Prince Philip in 1952.
#16 Read more . . 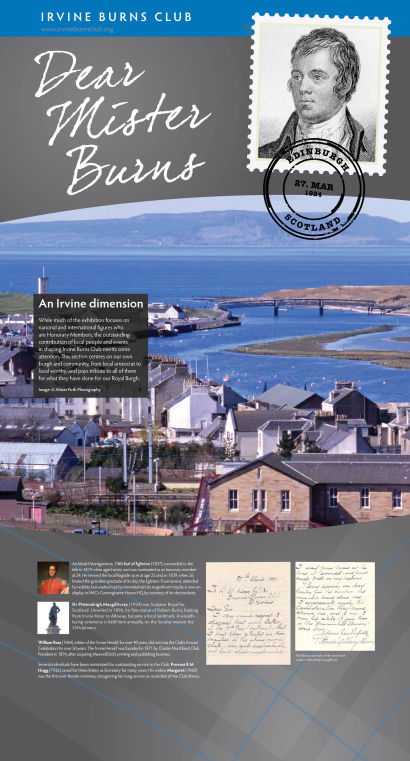 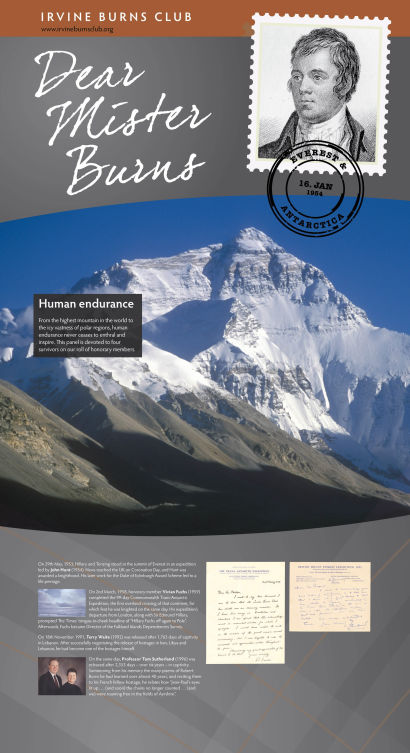 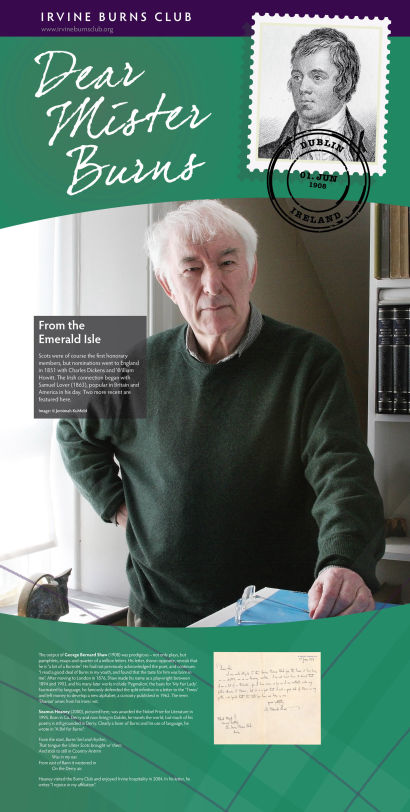 From the Emerald Isle 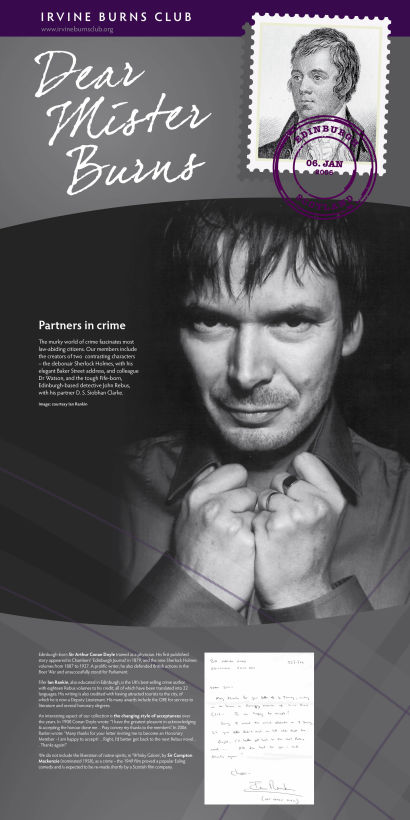 Ian Rankin was nominated in 2006 - both Rebus and Sherlock Holmes appear in our files.
#21 Read more . . 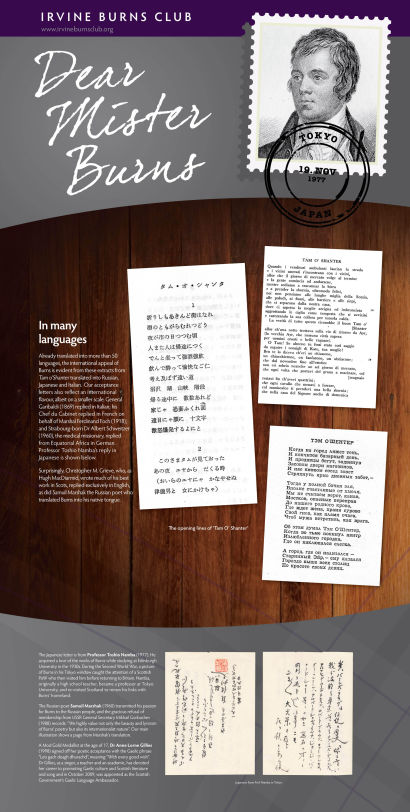 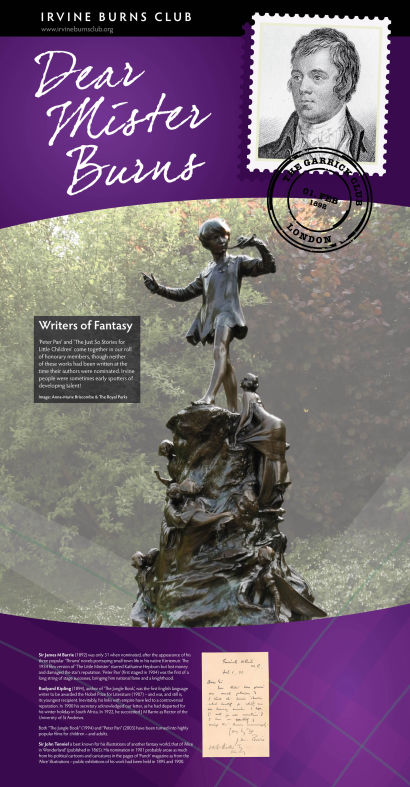 The authors of 'Peter Pan' and 'The Jungle Book' and the illustrator of 'Alice in Wonderland' all wrote to Irvine.
#23 Read more . . 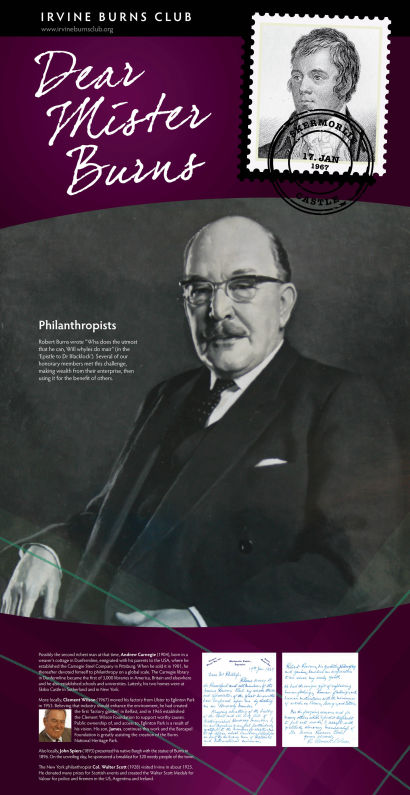 'Dear Mr Burns' was sponsored by

#1 Welcome: The criteria guiding nomination are simple. Nominees must be persons eminent in the literary world, or eminent in other fields, or must have given particularly outstanding service to Irvine Burns Club. The preservation of acceptance letters over almost two centuries is remarkable for a small club and Irvine can be rightly proud of this inheritance.

#2 Sean Connery (1989): This panel also celebrates John Grierson (nominated in 1960), the 'father' of British and Canadian documentary film, and Douglas Fairbanks Jr (nominated in 1995), who began his career in silent films, and wrote his acceptance from the QE2 on QE2 headed paper.

#3 Jack Nicklaus (1981): This panel also celebrates Arnold Palmer (nominated  in 2000), winner of The Open in Troon in 1962, who had, over the years, done much to popularise the game of golf, and the 5th Earl of Rosebery (nominated in 1886), a keen supporter of horse racing, who unveiled the statue of Burns in Dumfries, helped save the Auld Brig o' Ayr, and ensured that the Glenriddell manuscripts went to the Scottish National Library; his political career culminated in his Premiership of 1894-95.

#4 John Galt (1828): One of the first two Honorary Members in 1828, when the Club members nominated two writers born in Irvine - John Galt the novelist (and entrepreneur) and James Montgomery the hymn-writer (and social activist). This panel also celebrates Ayrshire novelists William McIlvanney (nominated in 1990) and Andrew O'Hagan (nominated in 2009).

#6 Alfred, Lord Tennyson (1863): Tennyson was a friend of publisher Alexander Macmillan, an Irvine native, whose brother Daniel had worked in the bookshop of Maxwell Dick; at the time of his nomination, Tennyson was the pre-eminent Victorian poet and held the post of Poet Laureate for an incredible 42 years. This panel mentions the six other Poets Laureate who accepted Honorary Membership of Irvine Burns Club: Alfred Austin (1892), Robert Bridges (1914), John Masefield (1931), Sir John Betjeman (1977), Ted Hughes (1987) and Andrew Motion (2000).

#7 General Giuseppe Garibaldi (1869): The Glasgow auctioneer Robert McTear, a friend of Irvine Burns Club, visited Garibaldi on Caprera in 1869. The Scottish public had been gravely disappointed by the curtailing of Garibaldi's British visit in 1854, yet continued to support his aim to unify Italy. McTear reported the Club's nomination and Garibaldi accepted (his letter, as those of all Honorary Members, appears on our Honorary Member pages). This panel also celebrates Karl Blind (1870), who led the  revolution in Hungary in 1848, the 'year of revolutions' across Europe, and Wendy Wood, the Scottish Patriot (1974).

#8 President Theodore Roosevelt (1908) became the youngest President of the U.S.A. in 1901 aged 42 - his letter refers to his 'Scotch blood' - his family were Ulster-Scots who emigrated in 1729. This panel also celebrates President Woodrow Wilson (1919) who wrote hos acceptance letter from the American Commission to Negotiate Peace in Paris, and General Dwight D Eisenhower (1947) who was US President in 1953-61.

#9 Sir Winston Churchill (1946) was nominated in the same year as Field Marshal Montgomery. This panel also celebrates Lord Roberts (1894), known as the 'Hero of Kandahar' after his brilliant relief of that Afghan city in 1878, and General Jan Smuts (1930), the Boer War commander who later served twice as the Premier of South Africa.

#10 Sir Alexander Fleming (1953) wrote his acceptance letter from St Mary's Hospital, London, where he had discovered penicillin in 1928 and named it in 1929; born in Darvel, he had attended Kilmarnock Academy. This panel also celebrates Sir Bernard Lovell (1962) of Jodrell Bank fame and Professor Christiaan Barnard (1979), who carried out the first heart transplant, in the Groote Schuur Hospital, Cape Town, and mentions Albert Schweitzer (1960), whose letter, in German, arrived from the Belgian Congo.

#11 Dr Sir Roger Bannister (1955) ran the first sub-four minute mile in 1954, and wrote from the same hospital as Alexander Fleming, the discoverer of penicillin. This panel also celebrates Sir Francis Chichester (1968), who was the first to sail single-handed round the world from west to east, ands Sir Jackie Stewart (1998), thrice World Champion Driver, but nominated for his support of dyslexia charities.

#12 In her hand-written acceptance letter, Margaret Thatcher (1979), the longest-serving Prime Minister of the 20th century, reveals that she was a huge admirer of Robert Burns. The supplementary text on this panel lists the nineteen British Prime Ministers among our Honorary Members: from Benjamin Disraeli (1854) via Harold Macmillan (1958) - "my grandfather Daniel was apprentice to a bookseller in Irvine at the age of ten [so] I have a family association with your ancient burgh" - to Gordon Brown (2008).

#13 Donald Dewar (2000) was proud of his role in establishing the Scottish Parliament, and Irvine Burns Club has continued to invite successive First Ministers to accept honorary membership. In earlier days, several holders of the office of Secretary of State for Scotland were nominated, including A J Balfour (1890), Lord Balfour of Burleigh (1899), The Marquis of Linlithgow (1901, when he was the first Governor General of Australia), Thomas Johnston (1946) and William Ross (1971).

#16 Royalty and a Royal Burgh: In this panel, the Club mentions Prince Philip (1952, before Princess Elizabeth ascended the throne) and Lord Louis Mountbatten (1957), as well as a number of honorary members who have represented the monarch, such as Andrew Fisher (1920), born in Crosshouse, who was Australian High Commissioner in 1916-21, and the Irvine-born Sir James Salmon (1880), who was honorary physician to Queen Victoria.

#17 Irvine connections: This panel mentions matters nearer home, featuring the 13th Earl of Eglinton (1837) who hosted the grandest spectacle of his day, the Eglinton Tournament, Dr Pittendrigh Macgillivray (1924), the sculptor of the Irvine Burns statue, William Ross (1964), the Editor of the 'Irvine Herald' for many years, and Provost R M Hogg (1926) who, with his wife Margaret Hogg (1960, the first female nominee), cared for the Club's papers, including the many honorary acceptance letters, for many years.

#18 Human Endurance: Four individuals were nominated for the human endurance which never fails to inspire: John Hunt (1954) led the 1953 ascent of Everest, Vivian Fuchs (1959) completed the first overland crossing of Antartica in 1958, Terry Waite (1992) was released after 1,763 days in captivity in the Lebanon, and Professor Tom Sutherland (1996) was released on the same day after 2,353 days in captivity, having fortified himself and his fellow hostages by summoning from his memory, and reciting, the many poems of Robert Burns he had learned over almost forty years.

#20 From the Emerald Isle: The first Irish writer in the roll of Honorary Members was Samuel Lover (1863), but two others are much better known today. The output of George Bernard Shaw (1908) was prodigious - plays, pamphlets, essays and a quarter of a million letters - he had not previously acknowledged the poet, but in his acceptance letter he wrote: "I read a good deal of Burns in my youth, and found that the taste for him was born in me." Seamus Heaney (2000), pictured in this panel, was a lover of Burns and his use of language, and visited Irvine Burns Club in 2004.

#21 Partners in Crime: The letters of Edinburgh-born Sir Arthur Conan Doyle (1900) and Ian Rankin (2006) epitomise the styles of their times: the former wrote "I have the greatest pleasure . . pray convey my thanks to the members" and the latter wrote "Many thanks for your letter . . I'd better get back to the next Rebus novel".

#22 In many languages: Acceptance letters include the one written in Japanese by Professor Toshio Namba (1977), whose love of Burns became known to us after a Scottish PoW spotted a picture of Burns in his Tokyo window during WWII. Russian poet Samuil Marshak (1960), who translated Burns for the Russian people, wrote in English. Garibaldi (1869) wrote in Italian and Albert Schweitzer (1960) in German. Dr Anne Lorne Gillies ended her acceptance in Gaelic: 'Leis gach deagh dhurachd' meaning 'With every good wish'.

#23 Writers of fantasy: Sir James M Barrie (1892) was aged only 31 when nominated, following the appearance of his three popular 'Thrums' novels portraying small town life in his native Kirriemuir, Angus. 'Peter Pan', the picture on the panel being of the statue in the Royal Parks, London, was first staged in 1904. Rudyard Kipling (1900) published 'the Jungle Book' in 1894 - he was the first English language writer to be awarded the Nobel Prize for Literature (1907) - his secretary wrote his acceptance letter, as the author had departed for his winter holiday in South Africa. The nomination of Sir John Tenniel (1901) probably arose as much from his political cartoons and caricatures in the pages of 'Punch' magazine as from his 'Alice in Wonderland' illustrations.

#24 Philanthropists: Andrew Carnegie (1904), possibly the second richest man of his day, latterly spent time in his two homes, at Skibo Castle in Sutherland, from where his private secretary replied on his behalf, and in New York. Clement Wilson (1967) believed that industry should enhance the environment and donated Eglinton Park to the local authority. John Spiers (1893) presented his native burgh, Irvine, with the statue of the Bard. Col. Walter Scott (1928), of New York, visited Irvine in 1925 - he donated many prizes for Scottish events.

#25 A few facts of interest: The furthest travelled letter is that of Professor Ian A Gordon (1976), an authority on John Galt, from Wellington, NZ, 11,468 miles from Irvine. Although nominees are usually encouraged to reply in their own hand, the first typed letter is that of Samuel Rutherford Crockett, novelist ('The Stickit Minister'), in 1895. The youngest nominee was the 14th Earl of Eglinton (1863) at age 21 and the oldest was Manny Shinwell (1985) at age 100. Three letters were written at sea, one being that of Douglas Fairbanks Jr (1995) from the QE2 (cabin 8184) after Past President Jack Lovie and he and their wives had enjoyed good conversation together.