- presented to Irvine Old Parish Church by Irvine Burns Club to commemorate the bicentenary of the poet's death, in the building where he worshipped while in Irvine in 1781 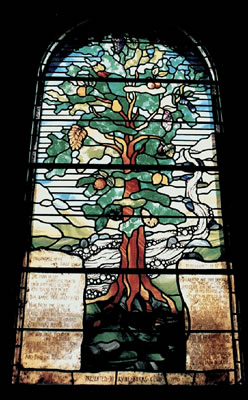 Finding comfort in the Bible at a time of crisis, Robert Burns wrote a verse paraphrase of the 1st Psalm, which describes the righteous man as "like a tree planted by the rivers of water". The stone at lower left bears the first three verses of his paraphrase (which we also print further down this page).

The setting is the Scottish landscape - the tree growing beside a stream, "clear as crystal" (Rev. 22, 1); the image of "a falling crystal stream" is one to which the poet frequently returned.

The artist is Susan Bradbury, FMGP. Susan first came to Ayrshire as Irvine New Town artist in 1981, and works, both on new commissions such as for the Ayrshire Hospice and RAF Lossiemouth, and on restoring old stained glass, from the Stained Glass Partnership in a converted church in Kilmaurs. She was delighted to be invited to create this window for the Parish Church of the town which was so important at the start of her career.

Susan chose the colours of autumn - green, gold and brown - the warm golden-orange of a bracken-covered hillside, the grey-gold mixes of lichens on stonework. The gold links visually to the golden cornfields in the neighbouring Ruth and Boaz window to the left. The blue sky creates a positive sunny atmosphere, and provides a link with the Trades window to the right. The sparkle in the stream is achieved by differing textures of clear glass, and the sunlight through the leaves by differing degrees of acid-etching of the top green layer of the special glass used here.

The stream and tree are also the River of Life and the Tree of Life of Rev. 22 (1-2, 14,17); it "bare twelve manner of fruits"; the artist has chosen grapes, a pomegranate, fig, orange, lemon, olive, date, apple, pear, cherries, plums and hazelnuts. "The leaves of the tree were for the healing of the nations" makes us recall Burns' expression of brotherhood in " A man's a man for a' that".

Burns twice referred to Rev. 7, 15-17, which promises a much better life in the hereafter. The Lamb at the throne of God will lead those that serve God "unto living fountains of waters: and God shall wipe away all tears from their eyes". The 22-year old Robert told his father how these verses inspired him, and, nine years later, in a letter to Peter Hill, his Edinburgh agent and friend, he wrote that, if he could, he would "wipe away all tears from all eyes". These verses are on the stone at lower right, and are printed at the foot of this page.

The stone tablets, with their balancing Old and New Testament texts, could be the golden gates of the entrance to heaven (Rev. 22,14: "Blessed are they that do His commandments, that they may have right to the Tree of Life, and may enter in through the gates to the city"); they could also be standing stones forming an invitation to walk righteously by a crystal stream.

The window thus combines rich visual images of the natural world with symbolic links to beautiful passages of Scripture and to the life and works of Robert Burns.

a stained glass tribute to the founding of Irvine Burns Club in 1826, positioned in one of the windows of the Music Room in our premises

This superb window, created by Ayrshire stained glass artist Paul Lucky, tells the story of the time Robert Burns spent in Irvine, where he made new friends and, more importantly, first had the idea of publishing his work. The window contains facsimiles of original manuscripts held by the Club, the blue flowers of the flax trade that brought him to the town, and a map of Irvine at that time. It also highlights the esteem in which he was still held 45 years later by people who had known him, that they resolved to establish a Burns Club in his honour.
More details will appear on this page in due course.

this photo shows the position of the window (to the right) in our Music Room, as a local school pupil recites from the works of Burns at a competition (photo courtesy of Jan Bernhard Rønhaug) 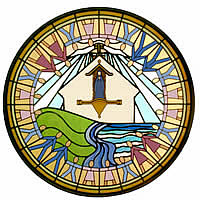 presented to St Mary's Church by Irvine Burns Club, in the year of office of Fr W Boyd as President of Irvine Burns Club 2004-05. The window decorates the front gable of the new church hall, built in 2004

Click if you wish to see the larger image

The Stained Glass Window tells the story of St. Mary’s Church in 2004. Around the circumference of the window are “the people of God”, the men, women and children who, according to the teaching of the Second Vatican Council, constitute “the Church”. In the centre of the window is the church building which is dedicated to Our Lady, whose statue stands above what, until now, has been the main entrance to the building.

St. Mary’s, with its neighbour, the Mure Church, is situated on a rise overlooking two notable landmarks in the town centre, the Low Green with the River Irvine running through it. These are depicted immediately below the church.

The river flows towards the Firth of Clyde, passing Irvine Harbour, originally a thriving port - source of Irvine’s trade and commerce, leading to the growth of modern Irvine. The historic importance of the Firth of Clyde is recognised by the broad expanse of water beside the river.

Above the church, rays of sunshine warming the earth are to be seen. These rays symbolise the grace of God continually shining upon the town and parish, bringing forth new life in each generation.

The window, donated by Irvine Burns Club, was designed by Gail Muir of the Lighthouse Glass Company in accordance with a narrative submitted by St. Mary’s Hall Project Team. The parish community is profoundly grateful to Gail and the Irvine Burns Club.

The address of the St Mary's Church website is on the Irvine links page.