Based on research by Bruce Lenman for Irvine Burns Club, published in the Burns Chronicle 1974; illustrations by David K Ramsay; also on this page: the political term 'heckling'

Flax is the fibre used to make linen. Flax fibres come from the annual plant Linum usitatissimum ('the most useful flax') or Common Flax, with erect slender stems about 50 cm high, and large purplish-blue flowers. It is a fairly demanding crop needing well-watered and fairly heavy soils. When the seeds are beginning to ripen, the crop is pulled up by the roots. In the days of Robert Burns, agricultural labour was still cheap enough for harvesting to be economic, but as the 19th century went on, Britain increasingly imported flax from the Baltic. A by-product is linseed oil.

After harvesting, combing or rippling the flax stems removed the seed heads. The stems were then tied up in stooks, and placed in water-filled pits for retting (meaning 'rotting'), decomposing through bacterial action for a week or two, producing the most awful stench, but softening the glue between the plant fibres. 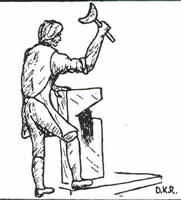 The next stage took place at the local mill, where scutching, beating the stems with a hinged batten to free the individual fibres, separated the useful fibres from the outer bark and the central woody stem. At this stage the flax is still full of impurities, so heckling removed any remaining non-fibrous material by drawing the stems through a big comb consisting of a bed of nails in a wooden board. Carding parted the fibres, breaking any natural locks, and laying the fibres absolutely parallel to one another, in a form suitable for spinning. At this point, the process passed to the womenfolk on the farm for them to spin the fibre on treadle-operated spinning wheels.

This building, at no.10 Glasgow Vennel ('the narrow street which carried the trade from Irvine to Glasgow') was restored in the 1980s. In Burns' time, the premises were divided into a but-an-ben, the but end being used to store flax, and the ben end being where the flax was dressed. It is recorded that, even in this confined space, work horses belonging to the neighbour were also stabled, most probably during the night when the heckling was finished. Here Robert Burns worked for ten hours a day in the ill ventilated building, drawing the rough flax through the heckles. It was indeed dull, monotonous work for a man like Burns; the dust from the flax was stifling and the odious smell sickened him.

Burns, as his brother Gilbert wrote, began "to think of trying some other line of life. He and I had for several years taken land of my father for the purpose of raising flax on our own account. In the course of selling it, Robert began to think of turning flax-dresser, both as being suitable to his grand view of settling in life, and as subservient to the flax raising. He accordingly wrought at the business of a flax-dresser in Irvine for six months, but abandoned it at that period, as neither agreeing with his health nor inclination." (Gilbert Burns, in a letter to Mrs Dunlop, 1797).

Robert Burns mentioned flax in his first letter to Willie Niven, in July 1780: "I have three acres of pretty good flax this season; perhaps in the course of marketing it I may come your way."

This document, thought then to be the only surviving copy of that edition of the 'Mercury'*, was exhibited at "The Burns Exhibition" in Glasgow in 1896, and afterwards returned to Thomas Wilson, Glentane Cottage, West Kilbride. At some point it then passed to Burns Cottage, Alloway, and was later acquired for Irvine Burns Club in 1976.

* We have since learned that copies are also held by Glasgow City Council's Mitchell Library and the University of Strathclyde's Andersonian Library.

Linen established textile working in Scotland (though it swung to cotton on the west and hemp and jute in the east), contributing to Scotland's self-sustained industrial growth.

'My twenty third year was to me an important era. Partly through whim, and partly that I wished to set about doing something in life, I joined with a flax-dresser in a neighbouring town,

to learn his trade and carry on the business of manufacturing and retailing flax. This turned out a sadly unlucky affair. My partner was a scoundrel of the first water who made money by the mystery of thieving; and to finish the whole, while we were giving a welcome carousal to the new year, our shop, by the drunken carelessness of my partner's wife, took fire and was burnt to ashes, and left melike a true Poet, not worth sixpence.'
('O why the deuce should I repine, and be an ill-forboder? I'm twenty-three, and five-feet-nine, - I'lI go and be a sodger!') 'I was obliged to give up business [this flax-dressing scheme]: the clouds of misfortune were gathering thick round my father's head, the darkest of which was, he was visibly far gone in a consumption; and to crown all, a belle-fille whom I adored [? Ellison Begbie], and who had pledged her soul to meet me in the field of matrimony, jilted me with peculiar circumstances of mortification. The finishing evil that brought up the rear of this infernal file, was my hypochondriac complaint being irritated to such a degree that, for three months, I was in diseased state of body and mind, scarcely to be envied by the hopeless wretches who have got their mittimus - "Depart from me, ye cursed".' [autobiographical letter to Dr John Moore, 1787].

Sources for the following information are an account by Graham Ogilvy in Billy Kay, "The Dundee Book", and an article by David McKie in 'The Guardian' of 28 April 2005.

The flax hecklers of Dundee established a reputation as the most radical and stroppy element in what was a famously radical town and by 1800 were already operating as a powerful trade union, to the extent that in 1809 a local employer noted that they were to some extent in control of the trade, dictating wages, conditions and bonuses (mostly alcoholic). The heckling shop, said another observer, was frequently the arena of violent harangue and ferocious debate. One heckler would be given the task of reading out the day's news while the others worked.

When they moved from factory floor to public meeting, they then fired off interjections designed to tease or comb out truths that politicians might prefer to conceal or avoid. Thus heckling entered the world of political debate, combining an incisive comment or question with spontaneous wit - quick-fire challenges enjoyed by those speakers who could deal with them and amuse their audience with a ready riposte.