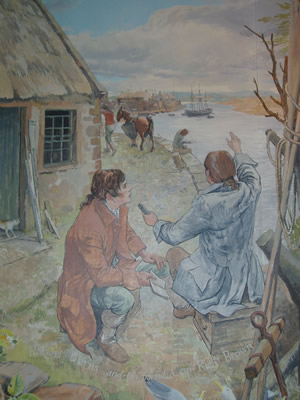 In this painting (in our audio-visual room) Robert Burns listens to the stories of Captain Richard Brown, in 1781, at Irvine harbour. Richard, six years older (28 to Robert's 22), was an important influence on Robert, regarding both women and poetry.

In a later letter to Brown (no. I below), the poet wrote: "Do you recollect a Sunday we spent in Eglinton woods? . . . You wondered that I could resist the temptation of sending verses of such merit to a magazine: 'twas actually this that gave me an idea of my own pieces which encouraged me to endeavour at the character of a Poet."

In 1787, Burns described his friendship as follows (to Dr John Moore, CL/254):
"I formed a bosom friendship with a young fellow, the first created being I had ever seen, but a hapless son of misfortune. He was the son of a plain mechanic; but a great Man in the neighbourhood taking him under his patronage gave him a genteel education with a view to bettering his situation in life. The Patron dieing just as he was ready to launch forth into the world, the poor fellow in despair went to sea; where after a variety of good and bad fortune, a little before I was acquainted with him, he has been set ashore by an American Privateer on the coast of Connaught, stript of everything. I cannot quit this poor fellow's story without adding that he is at this moment Captain of a large west indiaman, belonging to the Thames.
This gentleman's mind was fraught with courage, independence, Magnanimity, and every nobler manly virtue. I loved him, I admired him; and I strove to imitate him. In some measure I succeeded: I had the pride before, but he taught it to flow in proper channels. His knowledge of the world was vastly superior to mine, and I was all attention to learn. He was the only man I ever saw who was a greater fool than myself when WOMAN was the presiding star; but he spoke of a certain fashionable failing with levity, which hitherto I had regarded with horror. Here his friendship did me a mischief, and the consequence was, that soon after I resumed the plough, I wrote the WELCOME inclosed." [This refers to the poem 'A poet's Welcome to his Love-begotten daughter', addressed to Elizabeth Paton's child 'Dear bought Bess'.]

For the full story of Burns in Irvine, consult the audio-visual text.
Also see our page about the flax trade and Robert Burns

Footnotes:
1. Mackay (p.104) records Richard's mother as Jean Whamie, claiming (p.699, note 30) that Jane Whinie is based on a clerical error. On the contrary, the Old Parish Register for 2nd June clearly shows Jane Whinie (or possibly Whirrie?), while an earlier 6th Feb. 1753 record shows a son John born to a William Brown and Jean Wharrie (definitely 'rr' not 'm').
2. Mackay (p.699, note 34) cites OPR Irvine. The banns would be read there, but we have used the record in the Dundonald OPR. In 'Collected Letters', Mackay states he married late in 1787, but the correct date is in his biography of the poet.