Robert Burns in Irvine 1781-82
- other locations in the town

Now downloadable: the 1905 article on 'Burns and Irvine' by Rev Henry Ranken (President 1895)

After joining the main road from the statue towards Irvine Cross, you reach "Wellwood", 28 Eglinton Street (at the Provost's lamps), the home of Irvine Burns Club, founded in 1826 by two personal friends of the poet, and their friends. The Club possesses original manuscripts, a Burns Room with unique murals, a library, and a Concert Room upstairs.

The history of the building is as follows. Alexander Paterson had been a partner in Hunter’s Bank; after its incorporation into the Union Bank, he and his son John continued as agents with them. Both served on the council, John from 1854, serving as Provost in 1873-78; there is a fine painting of him on the staircase. John bought the previous house on this site in 1869. In 1898, the house passed to his widow, Mrs Catherine Gillies Paterson, who, in 1904, acquired the adjoining property and built the present house.

On her death, “Wellwood” passed to her daughter Annie, and, in 1934, to Annie’s two surviving brothers, J Graham and Robert, who bequeathed it to Irvine Burns Club in 1955, subject to a life rent in favour of their housekeeper Miss McLean. Irvine Burns Club used the ground floor from 1963, and became the sole occupant in 1976. The building now houses our Museum, with regular opening hours and free admission.

The Eglinton Arms (now The Carrick)

At the Cross, set in the pavement outside the Eglinton Arms Hotel, is a roundel showing the plants used by Surgeon Fleming to treat Burns in November 1781, when "luckless fortune's northern storms laid a' my blossoms low!" The roundel was commissioned by Eglinton Burns Club from artist Ian Cooper in 1996.

Beyond, at Glasgow Vennel, is the Heckling Shed, where Burns worked in 1781 - restored in 1982 by local authorities, the Tourist Board and the Clement Wilson Foundation, with the assistance of the Irvine Burns Club. Nearby, at no. 4, are the lodgings where he stayed.

At the Parish Church are the graves of David Sillar ("Dainty Davie") and Mauchline Belle Helen Miller, wife of Dr John Mackenzie; inside is the Robert Burns stained glass window by artist Susan Bradbury - presented by Irvine Burns Club as a Bicentenary Year tribute in 1996. 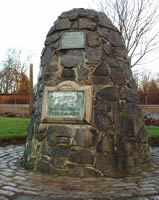 Off Bank Street, at Mackinnon Terrace, a cairn records the Drukken Steps in the Eglinton woods - a favourite walk of Burns and Richard Brown. The bypass referred to in the later inscription is visible behind the monument. (Click it to enlarge.) The crossing over the Red Burn, in the old Eglinton Woods near Stanecastle, was a grid ref. NS 329 404.

The upper inscription (1976) reads:
This cairn was erected for Irvine Burns Club to mark their 150th anniversary and to re-locate the plaque originally placed at the Drukken Steps 700 yards north west of this spot by W & C French (Construction) Ltd, builders of Irvine by-pass, January 1976.

The gardens of Eglinton Country Park, established by the Clement Wilson Foundation, were graced by a fine Belgian statue of Burns, presented by Mr R Clement Wilson, now held elsewhere for security reasons.

The 11th Earl of Eglinton, Archibald Montgomerie (1726-96), (evidence?) stood as guarantor for the printing of the 1786 'Kilmarnock Edition' of Robert Burns' poems, together with John Hamilton, later Dr. Hamilton, a medical student and son of Provost Charles Hamilton of Irvine. He also sent ten guineas to Burns on his arrival in Edinburgh as a subscription for a 'brace' (source?), that is two copies, quoted however as 42 by most authors (36 by one, and in the subscribers list) of the Edinburgh Edition of the Poems. At 5s for subscribers and 6s for others, 10 guineas for two would have been extremely generous and the actual intention is quoted as "To bespeak [order in advance] the new edition and hand him a suitable gift of money". Again, refer to the information provided by Roger Griffith on Wikipedia.